St Louis has seen its fair share of disasters. Earthquakes, tornados, epidemics and fires. Some caused by the carelessness of its people and others by the mighty power of nature.

The most severe of several New Madrid Earthquakes that occurred in the winter of 1811 and 1812 occurred on February 7, 1812. It is believed that the magnitude of this quake was between 7.4 - 8.0. The earthquake was felt as far away as Washington DC where church bells were said to have rung. At the epicenter of the quake in New Madrid Missouri, the town was completely destroyed and the Mississippi River was said to temporarily have run backwards because of the upward thrusting of the riverbed that created a temporary dam as well as multiple waterfalls. The quake was felt in St. Louis as well and many houses were severely damaged and their chimneys were toppled.

Another catastrophe for the residents of St. Louis occurred on May 7, 1849. The Great Fire of 1849 began as a small fire when one steamboat, moored along the St. Louis riverfront, caught fire. The fire spread to the other steamboats also moored along the levee and then jumped to the merchandise on the docks and the warehouses lining the riverfront. Firemen worked for 11 hours and eventually had to use gunpowder to blow up 6 buildings in front of the fire to stop its spread. When it finally ended, it had destroyed almost 15 city blocks, much of the river front's commercial district, many tons of merchandise and more than 20 steamboats. Three people lost their lives, one being a fireman who was killed while spreading the gun powder in the last building to be blown up. 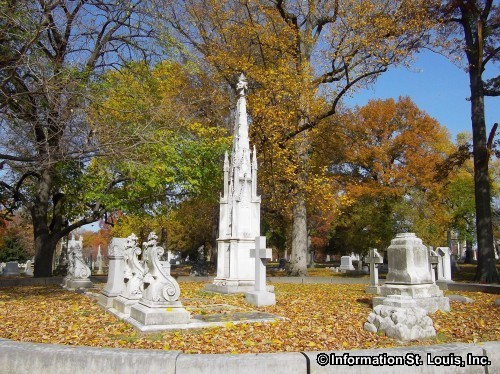 The embers of the Great Fire had barely cooled when the Cholera Epidemic of 1849 peaked during that summer and killed almost 10% of the population of St Louis. Cholera was a relatively new disease and no one knew how it was spread or how to treat it. The first deaths from the disease were in January of 1849 and it was thought that a large influx of newly arriving German immigrants had brought the disease to St. Louis. Sanitation was extremely poor in St. Louis. With no sewer system, human waste and garbage ran right into the wells and drinking water which caused the rapid spread of the disease. It was eventually discovered that the polluted drinking water was the cause of the disease. By the end July of 1849, 4,547 cholera victims had been buried, many in the newly opened Bellefontaine Cemetery.

These two catastrophes, the fire and cholera epidemic, brought about permanent changes in St. Louis. Building standards were instituted emphasizing fireproof building materials and the streets were widened to 60 feet, all to help reduce the chance of a fire spreading. A professional fire department was also created. Sewer systems were built to keep raw sewage out of wells and the rivers. Chouteau Pond, which had become a cesspool, was drained. The practice of quarantines were mandated when it was deemed necessary.

On May 27, 1896, a tornado came through St. Louis city and then continued on to East S.t Louis destroying or severely damaging everything in its mile wide continuous path and left over 250 confirmed dead and approximately 185 people missing. The tornado first touched ground near the St. Louis City Hospital at Lafayette and 14th and almost completely destroyed the buildings there. It continued to zigzag to Lafayette Square Neighborhood, uprooting the trees in Lafayette Park and damaging or destroying the stately homes that surrounded the park. It then moved on to Soulard, then to the levee and crossed over the Mississippi River on to East St. Louis. In the 15 minutes of the tornado's rampage, 8,800 buildings were either damaged or completely destroyed. Steamboats were sunk along the river banks, railroad cars knocked off their tracks, power plants destroyed, churches demolished. Estimates of the damage put it over $10,000,000. At the time, it was said to have been the costliest and 3rd deadliest tornado in US history.