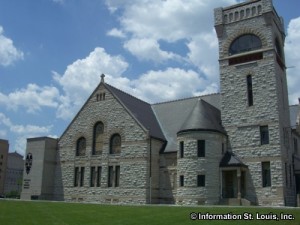 The Grandel Theatre, located in the Grand Center in St. Louis, was once the church for the First Congregational Church. The church, built in 1884 in the Romanesque Revival style, was designed by architect Lewis Frederick Rice, who was a Civil Engineer for the St. Louis Water Works until 1871. The church had been vacant for many years when The Grand Center Organization purchase it in 1989 and began a multi-million dollar renovation. The renovation included making a 450-seat, state-of-the-art theater and an upstairs banquet facility, The Grand Hall, which is available for rental.

The Grandel Theatre had been the mainstage for the St. Louis Black Repertory Company and the St. Louis Shakespeare for 20 years up until the Grand Center sold it in 2013 causing the Black Rep to find a new main stage.

Do you have a photo for Grandel Theatre? Send it to us! Submit Your Photo