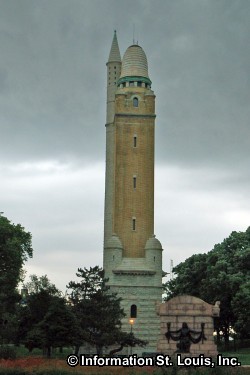 The Compton Hill Water Tower is the "newest" of the three water towers located in the city of St Louis. Built in 1898, the tower has been totally restored to it former beauty. It is located in the 36-acre Reservoir Park and is the only tower that is still accessible. On the first Saturday of each month, and on the full moon of each month (see website for dates), April through November, the Water Tower is open to the public. Visitor can climb the 198 step spiral staircase to the top of the 179-foot tower to take in the incredible views of the city of St. Louis. An admission fee is charged.

Out of the seven water towers that are still in existence in the United States, St Louis is home to three. The other two water towers are the Bissell Water Tower and the Grand Water Tower. These three water towers located in St. Louis are each over a century old, being built in the late 1800's. They are actually standpipe water towers and were built to equalize the water pressure in the city. The old steam driven water pumps that sent water through the city also caused large surges in the water pressure which caused the pipes to rattle and shake. The towers were built around the standpipes for aesthetic purposes and now each of them are on the National Register of Historic Places and are St Louis Landmarks.

Do you have a photo for Compton Hill Water Tower? Send it to us! Submit Your Photo