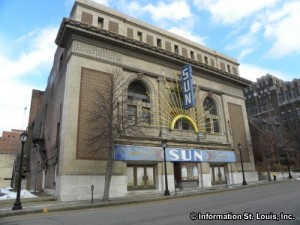 
The Sun Theater was opened in 1913 as the Victoria, a playhouse that featured productions done in German. Unfortunately for the Victoria, WWI occurred and it was closed because of anti-German sentiment. The theater would later change functions several times. It would be a burlesque house, a church, a jazz club and a movie theater. All were short lived and would leave the building vacant. Today it remains empty.

Do you have a photo for Sun Theater in Grand Center? Send it to us! Submit Your Photo