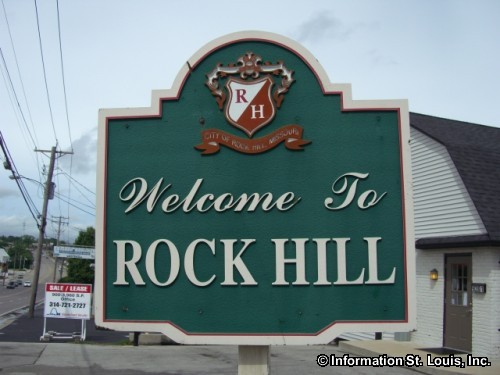 The City of Rock Hill Missouri is located in Mid St Louis County, about 25 minutes west of Downtown St Louis via Interstate 64. Important roads for the community are Manchester Road, Rock Hill Road, McKnight Road, Old Warson, Berry Road, Bismark Avenue and others. The City was officially incorporated in 1929. In 2010, the population of Rock Hill was 4,635 residents.

Many city parks are available for the residents of Rock Hill. The seven parks that Rock Hill maintains feature amenities such as playgrounds, picnic sites and shelters, walking trails, athletic fields and more. The Rock Hill Parks and Recreation Department also hosts several community events such as a Fall Festival and Parade and coordinates recreational programs and summer camps for children.

Two St Louis County Landmarks can be found in Rock Hill. The James C. Marshall House, "Fairfax", was built in 1839 by John Marshall. It served the Marshall family as their residence, a place of business, a stage coach stop and the first post office for the settlement that later became Rock Hill. Fairfax is also on the National Register of Historical Places. The other landmark is (was) the Rock Hill Presbyterian Church (razed in 2012). John Marshall donated the land that the church was built on in 1845. Reverend Artemus Bullard, a visiting Presbyterian pastor, gave the church and the area its name, Rock Hill.

Do you have a photo for Rock Hill Missouri? Send it to us! Submit Your Photo