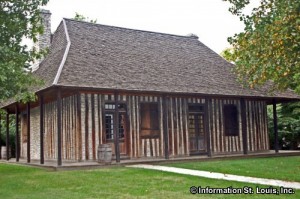 The Cahokia Courthouse is located in the Colonial Cahokia State Historic Site complex and is on the National Register of Historic Places . It was built in 1740, originally as a residence, during the time period when Illinois was a French colony. In 1793, the building was purchased by the Common Pleas Court of the United States Northwest Territory and used to handle any territorial, political or legal issue. It is an example of the French Creole architecture known as poteaux-sur-solle (post-on-sill) construction. Poles are placed vertically along a horizontal log and then the spaces are filled in with stone and mortar chinking. It is important in that it is one of only thirty such constructed buildings that are left in the United States. The Old Cahokia Courthouse was also used as a headquarters by Lewis and Clark for recruiting and acquiring supplies for the expedition. They were there from December 1803 until the spring of 1804 while the rest of the expedition party camped at nearby Camp River Dubois.

The Cahokia Courthouse is the oldest courthouse in Illinois. It features three rooms that contain exhibits of the history of the area and the courthouse, French colonial life and the role of the post office during that time. Another room is furnished how the courthouse would have looked during the early 1800's. Other exhibits are of the Lewis and Clark Expedition.

The courthouse is open to the public as part of the Colonial Cahokia State Historic Sites complex and may be toured year round, Thursday-Saturday, 9am-4pm for FREE, but donations are appreciated. See website for more info and updated days and times. 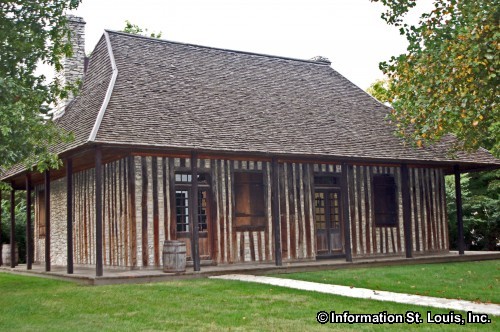 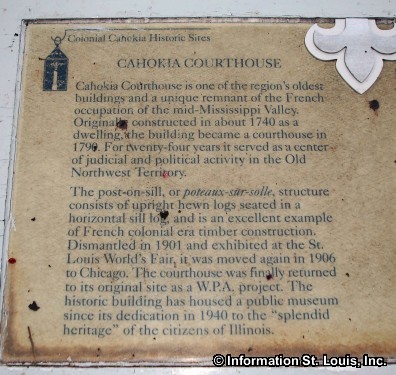