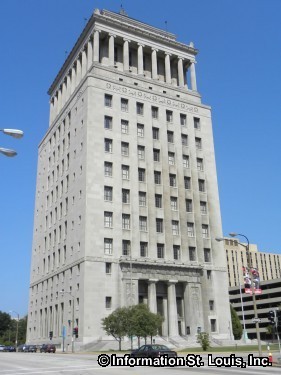 The Civil Courts Building is located in Downtown St Louis Missouri. It was built in 1930 to replace the Old Courthouse. The building is used by the 22nd Judicial Circuit Court of Missouri in St Louis. The building, made out of Indiana limestone, has an architecturally interesting roof. It was designed to mimic one of the "Seven Wonders of the Ancient World", the Mausoleum at Halicarnassus or Tomb of Mausolus. It is then topped with a pyramid which has at the summit two "Greek sphinx-like figures" or "Griffins", each 20 feet long, 12 feet wide and 12 feet tall. The architectural firm of Klipstein & Rathmann designed the building, who then later designed the St Louis Post Office on Market Street in 1937.

Do you have a photo for Civil Courts Building? Send it to us! Submit Your Photo