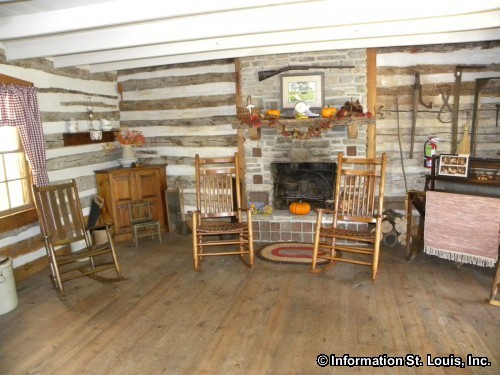 The Yanda Log Cabin is located on Main Street in Glen Carbon Illinois. The cabin was built 1853 by William Yanda, the blacksmith of the Village. He and his wife, Annie Zeola, were immigrants from Bohemia, Austria. They raised 10 children in the cabin. Several descendants of the Yandas' lived in the cabin before it was eventually sold.

By the time it was sold, the cabin had gone through some mondernizations and it was thought to be just an ordinary "house". The plan was that the "house" was going to be used as a practice burn by the Village fire department, but when the vinyl siding was removed to do so, the historic log cabin was discovered underneath! All plans of burning it were stopped and Glen Carbon purchased the lot and the cabin in 1989 and began the restoration process.

Today the cabin is used for special events and is opened to the public on the fourth Saturday, April through October, from 10am to 2pm. Admission is free.

Do you have a photo for Yanda Log Cabin? Send it to us! Submit Your Photo