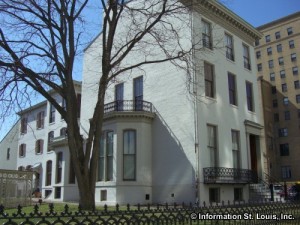 The Campbell House Museum is located in downtown St Louis Missouri and is a St Louis Landmark. The Campbell House was the home of prominent St. Louis businessman, Robert Campbell. Built in 1851, it was occupied by Robert and Virginia Campbell and their family until their last son, Hazlett Kyle Campbell past away in 1938 at the age of 80. It now is a museum and is one of the most accurately restored 19th century buildings in America. Restoration efforts were guided by over 60 photographs of the home taken in 1885. Fragments of original wallpaper and carpet were discovered behind baseboards and built-in bookcases. The remnants were then were used to reproduce the wall coverings and carpets that were installed during the 10 year, 3 million dollar restoration process. Not only is the house a glimpse into how a 19th century St. Louis family lived, there is also the collection Robert Campbell's letters, journal, family papers, business ledgers and receipts and photographs that tell the story of the rise of the city St. Louis.

The museum is open to the public and a guided tour can be taken for an admission fee.

Do you have a photo for The Campbell House Museum? Send it to us! Submit Your Photo