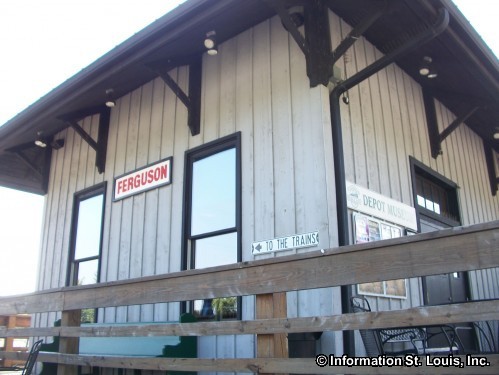 The historic Ferguson Train Depot, located in Ferguson Missouri, was built during the late 1800's and was located on the North Missouri Railroad, later known as the Wabash Railroad. William B. Ferguson granted the railroad a narrow right of way through his farm with the stipulation that they build a depot there. The Depot was built in the standard station design and is the only remaining depot of this design left in Missouri. It became the center of the community as the town of "Ferguson" grew up around it.

Today the Whistle Stop Depot Frozen Custard Shop is located in the restored Ferguson Depot and offers visitors an opportunity to learn some of Ferguson's history through the displays that can be found inside. Train enthusiasts will enjoy the 20 or more Norfolk-Southern freight trains that come by the Depot daily! And of course all will enjoy the desserts, featuring fresh, daily made vanilla and chocolate frozen custard, as well as a different special flavor each day. Cherry Bon Bon, Caramel Apple and Chocolate Covered Orange are just a few of the special flavors. The Whistle Stop also has daily lunch specials from their "hot" side of the menu which include a sandwich, soft drink, side salad or soup, and a one scoop cup of the flavor of the day frozen custard.

Do you have a photo for The Ferguson Train Depot? Send it to us! Submit Your Photo