The Cheltenham neighborhood occupies a small area of St. Louis, located just south of Forest Park. Its boundaries are Manchester Avenue to the south, Macklind Avenue on the east, Oakland Avenue to the north and Hampton Avenue to the west.

The Cheltenham area was originally settled because of the River de Peres, which at that time was a clear natural stream, and because of the clay that was found there. One of the earliest businesses that came to Cheltenham to take advantage of the clay was the Laclede Fire Brick Company, established in 1844. The brick company and the coming of the railroad brought many immigrants of Irish, Italian, German and Polish descent to work in the brick factory or in the clay mines. 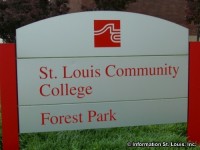 Within the boundaries of Cheltenham lie several large institutions and organizations that are important to the St. Louis Metropolitan area. The Salvation Army has its regional headquarters located on Hampton. The Humane Society of Missouri is located on Macklind. And the St Louis Community College-Forest Park Campus is located on Oakland. The seventy year old St Louis Arena, AKA the Checkerdome or "the Barn", home to the NHL's St Louis Blues hockey team, was also located in Cheltenham until 1999 when it was imploded by the city to make way for the new Highlands development.

Do you have a photo for Cheltenham Neighborhood? Send it to us! Submit Your Photo