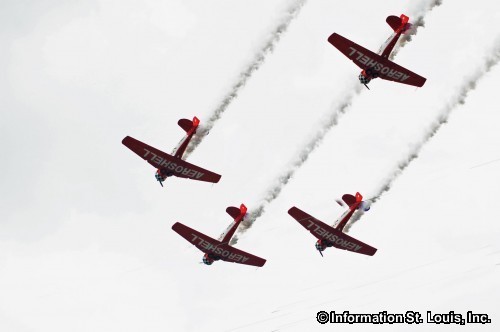 Across the United States, cities large and small celebrate the independence of our great nation on July 4th. The City of St. Louis and the communities in the Metropolitan area are no different. In fact, St. Louis puts on a large celebration on the grounds of the Gateway Arch called Fair Saint Louis. It runs for several days including the July 4th and features live entertainment on several stages, festival food and drink, kids activities and more. A dazzling fireworks display is held on the Mississippi riverfront each evening of the Fair. On the morning of the Fourth, the annual Veil Prophet Parade is held in St. Louis. Hundreds of people line the parade route to see large balloons, marching bands, floats and a whole lot of patriotism. Young and old alike will enjoy the Fair St. Louis Air Show that is also held on the Fourth of July. The Air Fair features feats of incredible aerobatics performed by military and civilian aircraft.

Fourth of July Celebrations Around Town