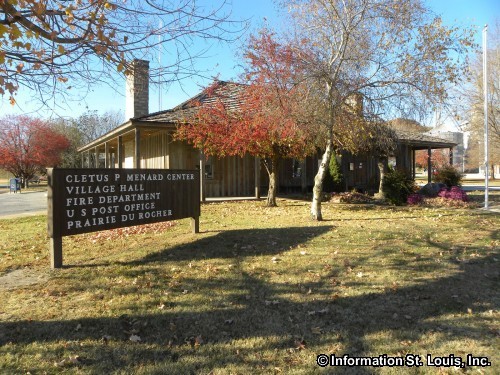 Prairie du Rocher is a small village located in Randolph County Illinois, approximately 40 miles south of St Louis Missouri. The village is situated just east of the Mississippi River along the bluffs in what is called the "American Bottoms". The village was founded in 1722 by French colonists as a farming community to supply the nearby Fort de Chartres and New Orleans with wheat and corn. Surviving several floods, the New Madrid earthquake, British takeover, it's French settlers moving to the west side of the river and the eventual closing of Fort de Chartres, Prairie du Rocher became a "village" by act of the Illinois State legislature in 1821, three years after Illinois became a state.

Today many of the village's residents still bear the French surnames of those 18th century French settlers. Several historical annual events take place in Prairie du Rocher. One event is the Fort de Chartres' Rendezvous where live re-enactments of fort life take place, as well as, celebrating all things French!

Do you have a photo for Prairie du Rocher? Send it to us! Submit Your Photo