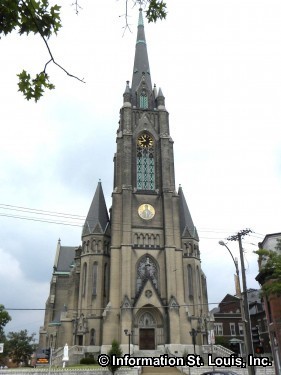 With a towering 300 foot steeple, the St. Francis de Sales Oratory is a very visible landmark located in the Fox Park Neighborhood. The parish was established in 1867 for the large German Catholic population located in the neighborhood. Construction on the German Gothic Revival church was begun with the laying of the cornerstone in 1895 and was finally completed in 1908. The church has a nickname of the "Cathedral of the South Side." Because of the declining number of parishioners, the St. Francis de Sales parish was closed by the St Louis Archdiocese in 2005 and the church building was slated to be torn down. Thankfully, permission was given for the building to become an oratory and it was saved. The St. Francis complex was designated a City Landmark in 1971 and was placed on the National Register of Historic Places in 1978.

Daily Mass is held at St. Francis de Sales Oratory, with an 8am Low Mass and a 10am High Mass on Sunday and an 8am Low Mass Monday through Saturday with other services during the week. Public tours of the Oratory are available by contacting the Oratory office.

Do you have a photo for St Francis de Sales Oratory? Send it to us! Submit Your Photo