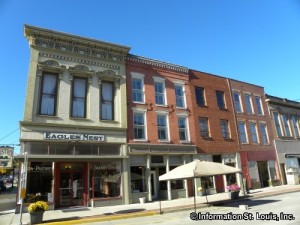 Historic Louisiana, Missouri, located about two hours north of St. Louis, lies along the banks of the Mississippi River, a river that is intertwined with the history of Louisiana. Several streets and districts in downtown Louisiana are listed on the National Register of Historical Places. The downtown business area, called the Georgia Street Historic District, has 54 historic buildings, mostly of Italianate or Victorian architectural style. It is also said that Louisiana has "the most intact Victorian Streetscape in the state of Missouri." Settlers first came to Louisiana in 1808. It wasn't until 1818 that the town was officially laid out and then incorporated in 1848. Originally established by the French when it was part of the Louisiana Territory, it is the oldest town in Pike County Missouri.

Louisiana has several events that are held throughout the year. The Annual Winter River Festival is held the last weekend in January that features a YMCA 5K Run, Eagle watching, Polar Plunge, all the local artists and their art, the House of Fire & Ice, and much more. The 50 Miles of Art Gallery and Studio Tour is held twice a year in April and November and highlights the local artists and their craft in the three cities of Louisiana, Clarksville and Hannibal that lie along 50 miles of Highway 79. The 3rd weekend in October is the Louisiana Country Colorfest with events that include a pie contest, a motorcycle show, the Pike County Memorial Hospital Baby Show, the Colorfest Parade, Miss Colorfest and 'lil Mr & Miss Colorfest contest, classic car show, live music and entertainment, carnival rides, arts and crafts and much more! On the Thursday after Thanksgiving, the holiday season is ushered in with the annual Winter Wonderland Celebration. Events begin at 5 pm and include a parade, a wreath decorating competition, and the lighting of the city Christmas tree. In December the annual Christmas Mid-town Church Walk is held which is hosted by the Louisiana Area Historical Museum. Walk participants visit several churches and hear a 15 minute program at each with the last church serving warm cider and cookies.

Do you have a photo for Historic Louisiana Missouri? Send it to us! Submit Your Photo