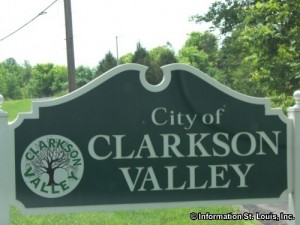 The City of Clarkson Valley Missouri is located in West St. Louis County. It was incorporated in 1989 and in 2010 had 2,632 residents. There are several major roads in Clarkson Valley. Clarkson Road runs north and south along most of its eastern edge, Kehrs Mill Road intersects Clarkson Road and cuts a diagonal northwestern path through the city, and Valley Road runs along a good portion of its western edge.

The Rockwood School District is the local school district for the residents of Clarkson Valley. The district's Marquette High School is located along Clarkson Road at Kehrs Mill and the district's Crestview Middle School can be found on Clayton Road at Valley Road.

(*The Clarkson Valley City Hall has a "Ballwin Missouri" mailing address because of its address on Clayton Road.)

Do you have a photo for Clarkson Valley Missouri? Send it to us! Submit Your Photo